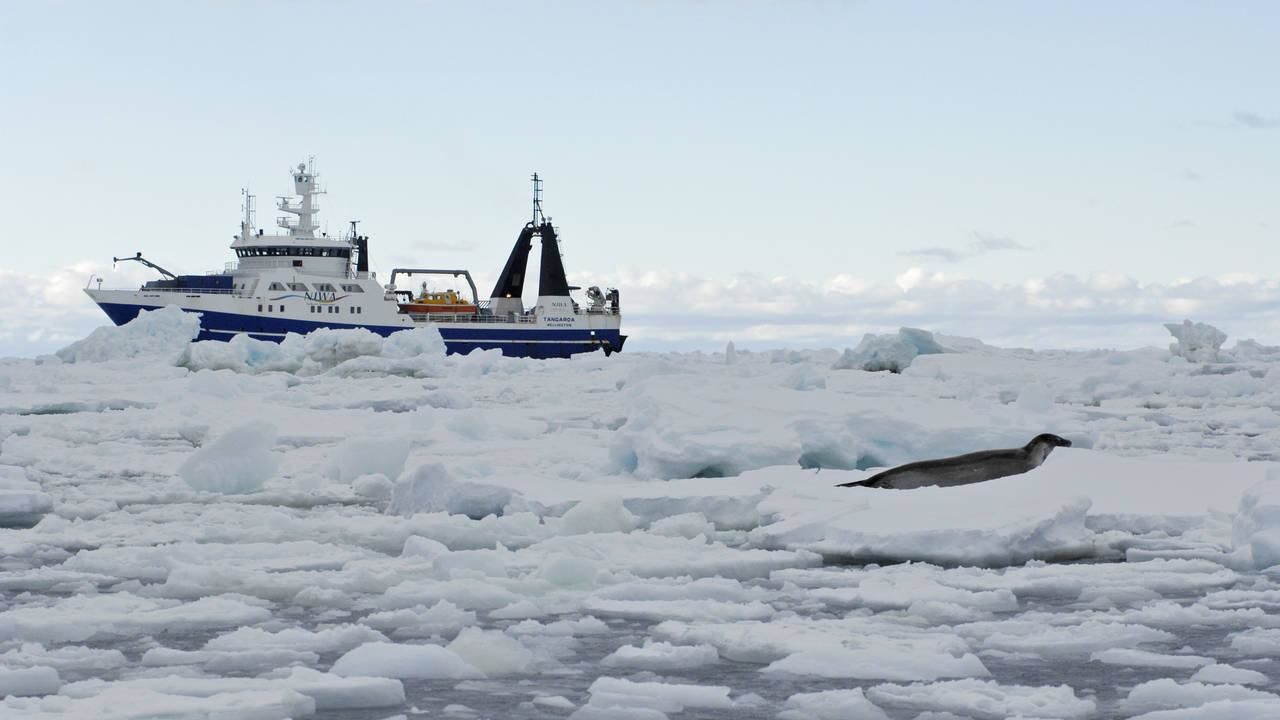 With two decades research experience, Andrew Stewart has worked at New Zealand’s National Museum for just under 30 years where he has specialised in marine species. During that time he has been involved with the curation and preservation of fishes both in the field and in the laboratory setting and, developed a keen interest in Antarctic fishes and deep sea fishes. Andrew is highly experienced at the identification and taxonomy of a wide range of reef and deep-sea fishes, especially in New Zealand, the Tasman Sea and the Southern Ocean.

Andrew has been invited to train and brief scientific observers from the Ministry of Fisheries in the NZ EEZ and in the CCAMLR area on species identification and collection. A participant on ship based expeditions; Andrew’s work processing identifying and registering fishes has seen him establish extensive networks with specialists around the world. In 1996 Andrew was jointly named New Zealand’s Science Communicator Award, has been published extensively and is regularly asked to speak at conferences as well as make comment through the news media on his specialty field.

Dr. Christopher Jones received a Ph.D. from the University of Miami, and has worked in the field of fish population dynamics and biology since 1989. Through the 1990’s, his research effort’s concentrated on assessment and population dynamics of highly migratory fish species in the Atlantic Ocean. In 1998, he started working exclusively with Antarctic species, and has served as chief scientist on numerous scientific expeditions, as well as participating in several international research expeditions to the Antarctic.

He actively participates in all scientific working groups of CCAMLR, and currently serves as convener of the CCAMLR Working Group on Fish Stock Assessment (WG-FSA). This group develops scientific advice toward the management and conservation of Antarctic fish and associated species.

Born in Germany, NIWA scientist Kareen Schnabel was bitten by the adventure bug at an early age spending her formative years in Germany, Holland and Ghana, West Africa. After gaining an undergraduate degree in marine biology and an MSc in aquatic biology and biochemistry in New Zealand, Kareen chose to specialize in marine invertebrates (specifically crustaceans) working in Canada (on Canadian arctic and subarctic marine amhipods), in the Bahamas and Belize on Caribbean spiny lobsters. More recently she has studied New Zealand’s deep-sea squat lobsters as well as traveling the world to participate in conferences and visit museum collections.

Since 2006, Kareen has managed the NIWA Invertebrate Collection in Wellington, New Zealand, a role that includes going to sea about once a year overseeing specimen collection, preservation and post-voyage processing. Prior to spending two months in the Ross Sea as part of this year’s IPY CAML program discovering what lives in that part of the Southern Ocean, Kareen spent three weeks investigating deep-sea cold seeps and attempting to find whales that had died and sunk to the sea floor off New Zealand’s coast and a month mapping the ocean floor and investigating sea floor biodiversity to the east of New Zealand.

Stuart Hanchet is a Nelson-based fisheries scientist with the National Institute of Water and Atmospheric Research (NIWA), where he is the leader of the Fisheries and Hydrology Groups. After completing his PhD at the University of Otago in 1986, Dr Hanchet joined the Ministry of Agriculture and Fisheries to develop a research program for southern blue whiting. He has since carried out research on a wide range of inshore and middle depth (200–800 m) fish species and has more recently managed and carried out research programs on the developing Antarctic tooth fish fishery in the Ross Sea.

Stuart is currently program leader of a FRST project looking at the sustainability of the Ross Sea and has been leading the development, implementation, and post-voyage analysis of New Zealand’s survey to the Ross Sea in 2008, which is part of New Zealand’s contribution to the International Polar Year (IPY). He has been a New Zealand delegate to the Commission for the Conservation of Antarctic Marine Living Resources (CCAMLR) since the mid 1990s and the convenor of its Working Group on Fish Stock assessment for four years between 2004 and 2007.

John Mitchell is a Wellington-based marine geologist with the National Institute of Water and Atmospheric Research (NIWA). After completing his degree at Victoria University, Wellington, John joined the New Zealand Oceanographic Institute (NZOI) in 1975 as a technician. NZOI, a division of the New Zealand government research organisation DSIR, became part of NIWA in 1992. In 1986 John’s role changed to that of a scientist in the marine geology group. Over the years John has specialised in offshore marine geology surveys for research and commercial purposes leading many as voyage leader. In recent years this work has further developed into leading multi-beam and seismic surveys along with hydrographic surveys. In his 33 years in the job John has spent nearly seven years at sea on both New Zealand’s and foreign research vessels. John has participated in many Antarctic projects and in particular four to the Ross Sea on NIWA’s research ship Tangaroa since 2001. For the IPY-CAML voyage John was brought into the program as Voyage Leader due to his expertise in the logistics of planning for and leading Antarctic voyages.

Julie Hall is a biological oceanographer based at the National Institute of Water and Atmosphere (NIWA) in Wellington where she is the Assistant Regional Manager. She obtained her undergraduate degree at the University of Otago in New Zealand and her Ph D in Ecotoxicology at the University of Manitoba in Canada. Julie returned to New Zealand on completion of her PhD and started work as a biological oceanographer researching the bacterial aspects of the marine food web. Over the past 20 years her research has widened to include algae, zooplankton and studies of the microbial food web in lakes, the open and coastal ocean. Julie lead all the non fisheries work that was conducted on the Ross Sea voyage including onboard experiments to investigate the impacts of acidification of the Southern Ocean. Julie is also NIWA’s Education Coordinator. On the IPY voyage she organised and led the educational outreach programme which included material being prepared for educational websites and for the general public.

Since completing his PhD at Victoria University of Wellington in 1982. Malcolm Clark has specialised in the biology and ecology of deepwater fish and fisheries.
With extensive seagoing experience, Malcolm has led several international surveys, including work off New Caledonia in 1997, on seamounts in the Tasman Sea in 2003, and in the Ross Sea in 2004 and 2008. He also participated in the 2005 “Ring of Fire” Expedition which included submersible dives (Pisces V) on Monowai and Rumble V volcanoes. Within New Zealand he has been responsible for research on most New Zealand orange roughy fisheries, and has designed and led over 50 deepwater fish surveys and research cruises.
Malcolm currently heads the NIWA (National Institute of Water and Atmospheric Research) research programme on the biology and ecology of seamounts. He also heads the Secretariat of the Census of Marine Life programme on Seamounts and is internationally recognised as an expert in deepwater fisheries, and seamounts research.